A lengthy coach journey followed by a delay in the start of the first game due to an injury to a player in a youth game was not the best preparation for the first game against Estrela Lisboa. EAFC started the game slowly and conceded a couple of avoidable goals and found themselves 3-0 down.

The second half was much better with several chances created, resulting in pulling back the game to trail 3-2. Further chances went unfinished, however, and we unluckily ended up losing by the same 3-2 margin.

With only 10 minutes between matches we then took on Paio Pires. The lack of rest showed immediately, and playing a very strong team with fresh legs we tired quickly and picked up a number of injuries. The final result was 9-1 to Paio Pires, but we did keep going till the end.

Overall the tournament was a testing afternoon, but good experience for our still relatively inexperienced squad. The opposition appeared to be a bit younger than us, and the lack of rest between matches told hugely in the end. It didn’t help that the original squad of 17 was reduced to 12 on the day due to injury and personal reasons.

Karl would like to thank everyone who made the trip, especially Carl who came in as the keeper at short notice and Didi for helping out.

Thanks also to Cristiano Gunners and Leões FC Tavira for their help in organising the trip. The club polo shirts designed for the tournament and future tournaments (as worn by the players in the image below) are available to buy from Karl priced at €15. Message him via WhatsApp on +351 913 274 787

We now move on to an over 45s 7-a-side tournament to be held in Albufeira on Saturday 25th September.

The trophy received for taking part, along with pennants of the two opposition clubs. 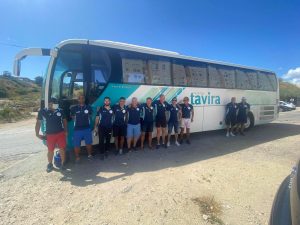 The EAFC squad along with their transport for the day.