A squad of 13 made the trip, and the morning saw us play group games against Shifnal, Bury Rangers A and Fat Boys to try and secure a place in the Trophy Group for the afternoon. Unfortunately we made a slow start and, despite playing some good football and matching our opponents, we lost our opening two games against Shifnal and Bury (both 2-0). We struggled to cope with the immediate physicality of the two team opposition teams and also the very poor playing surface. However, in both games it was our lack of composure in front of goal that really cost us. Had we scored when we were on top in these games it might have been a different outcome.

However, our third game was the turning point. Suddenly we found our scoring boots and brushed aside Fat Boys 4-0 to finish the group in third place and enter the Plate Trophy Group for the afternoon matches.

In the Plate Trophy group we faced two new teams, and beat the Italians of Fusilli Criniti 3-2 in the opening game. The scoreline doesn’t really reflect the dominance we had in this game, giving away two soft goals and failing to score more than the three we got. However, confidence was on the up, and we followed this up with a victory over Bury Rangers B (who had also won their opening game). This left us needing a point to top the group; we faced Fat Boys again in the final game and ran out comfortable winners in the end 5-0, with all the squad making an appearance in the final game apart from those that had picked up knocks during the tournament. 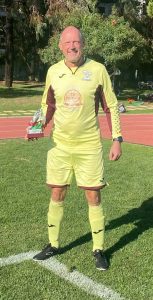 Carl with his Outstanding Keeper Award 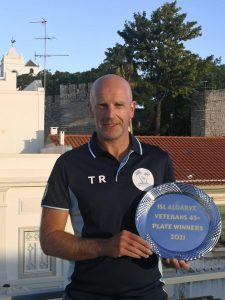 Captain Toby with the Plate Trophy

We showed great composure to come back after the first two games, and to win all four of our final games was a great credit to the belief of the players and the coaching and management of Karl.

It was also refreshing to hear that Shinal and Bury A (who we lost to, and who then finished 2nd and 3rd in the tournament) thought we were the best team they had faced on the day.